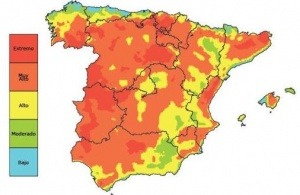 A drone designed to act in aerial extinction of wildfires

DRONE HOPPER is a drone designed to act in aerial extinction of wildfires. This is a high tech solution that permits its adaptability to different conditions and needs required at a given moment to control wildfires. Each drone has a maximum capacity of loading up to 300 litters of water and a size of 120 cm (wide) by 30 cm (height).

The selected configuration provides a compact, stable, and resistant solution to failures. The drone includes structural modifications that permit to implementcharacteristics that make viable to transport and nebulize up to 300 litters of water, it also includes control systems, thermographic cameras, and navigational systems.

How does it work?

The DRONE HOPPER drones are programed to act jointly in the aerial extinction of wildfires. The system incorporates heat sensors and geo-locating systems that permit locating the most adequate point for the fire extinction and coordinating theirsimultaneous action. The design makes use of the high speed air generated by the drone propellers to nebulize the water it carriers.

The drones are equipped with the necessary technology to nebulize water (up to 300 litters each drone) directly above the seat of fire for its extinction. Each drone includes a magnetic system to control the nebulization of water that permits using appropriate amounts of nebulized water to control a specific type of fire. It coordinates their actions using their navigational systems and thermographic cameras.

This aircraft will be presented during Expodrónica, the largest international fair of drones that this year will feature the participation of Chinese firm DJI, the largest manufacturer of drones in the world.