mercor tecresa® » News about fires » Do buildings collapse from fire? 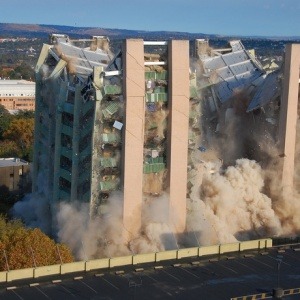 Do buildings collapse from fire?

Shills for the official story claim that the (steel-structure) buildings WTC1, WTC2 and WTC7 collapsed after they were weakened by fire. But fire itself does not cause steel-structure buildings to collapse. Here are several cases of fires in such buildings, none of which collapsed.

In May 1988 a fire at the Interstate Bank Building in Los Angeles destroyed four floors and damaged a fifth floor of the modern 62-story building. The fire burned for four hours. The building did not collapse.

In February 1991 a fire gutted eight floors of the 38-story One Meridian Plaza building in Philadelphia, Pennsylvania. The fire burned for 18 hours. The building did not collapse.

Also in February 2005 the 32-story Windsor Building in Madrid, Spain, caught fire and burned for two days. The building was completely engulfed in flames at one point. Several top floors collapsed onto lower ones, yet the building remained standing. See https://www.mercortecresa.com/en/bloghome/historic-fires-the-mistery-of-the-windsor

The still-uncompleted Beijing Television Cultural Center, containing the Mandarin Oriental Hotel, caught fire on 9 February 2009 (due to uncontrolled use of fireworks at Chinese New Year). 140,000 tons of steel was used in its construction. It burned for five hours, but it did not collapse. See https://www.mercortecresa.com/en/bloghome/the-beijing-television-cultural-center-fire

In November 2010 an apartment block in Shanghai caught fire (reportedly caused by welders) and 53 people died. It burned for more than four hours. The building did not collapse. See https://www.mercortecresa.com/en/bloghome/historic-fires-the-2010-shanghai-fire

On February 20, 2015, a fire “ripped through the Torch in Dubai — one of the tallest residential buildings in the world”, reports The Independent. Did the building collapse? No. See https://www.mercortecresa.com/en/bloghome/a-residential-skyscraper-in-dubai-has-caught-fire-in-the

It may be “obvious” that a heavy plane hitting a skyscraper would deliver a “tremendous” shock, but it doesn’t follow that the building must therefore collapse.