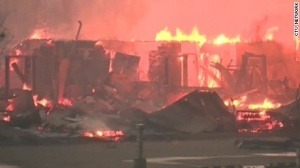 Worst fire in the 21st century towns and cities

Over the years, there have been many large fire in cities (Rome, Chicago, Boston, London…). They all started somewhere in the city and were not extinguished. Fortunately, today we have enough fire protection resources to prevent these “small fires” from developping and wrecking entire cities as before.

These are the worst fires in cities of the XXI century:

2008 – Camden Market Fire, which caused severe damage to one of North London’s most famous shopping districts.

2013 – Yarnell Hill Fire: Over 13 square miles, destroyed over 100 homes, and 19 members of the Granite Mountain Hotshots were killed in action

2013 – Lac-Mégantic derailment: Over 30 buildings in the town centre were destroyed in a train derailment, explosion and fire which caused 46 confirmed deaths. The fire made the event the deadliest train accident in Canada’s history since 1864