mercor tecresa® » News about fires » A fire changed his life 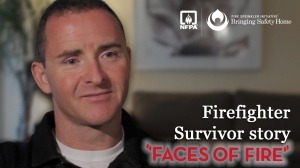 A fire changed his life

Firefighter and burn survivor Lionel Crowther details his harrowing recovery from a home fire and the emotional strain brought about by his injuries.

“I didn’t realize [my burn injuries] would affect not just me, but my wife and kids. It affected all aspects of our lives. I thought we would never get back to the life we had before.”

Injuries: Burns on 70 percent of his body; 30 percent were third-degree and 20 percent had to be grafted

Conducting a search and rescue during a home fire, firefighter Lionel Crowther was violently knocked to the ground by the intensity of the flames. He discovered his injured captain while heading for the exit. They escaped the home, but his captain later died from his injuries.

The fire had long-lasting ramifications on Crowther, his wife, and two children. Though trying to regain his independence, Crowther depended on his wife to tend to his most basic needs. Brushing his teeth and applying ointment on his own were fruitless endeavors. Emotional hardships also took its toll on the couple, who admitted that the injuries placed an immense strain on their marriage.

Had fire sprinklers been installed in that home, Crowther says so many lives would have been altered.