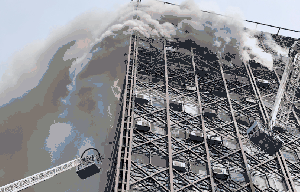 A fire has demolished the oldest skyscraper in Tehran

A fire has demolished the oldest skyscraper in Tehran (The Plasco building), killing at least 20 people. The last official report of the victims points to70 injured, mostly firefighters, of whom 47 were attended at the scene and 23, transferred to the hospital.

Rescue teams are still searching for those missing in the tragedy, which also caused dozens of injuries. Luckily the fire started at 8.00 local time (4.30 am GMT), when there were still not too many workers in the building. The merchants who were in the place when the fire began were evacuated by the emergency stairs, reason why at the moment of the collapse the building was almost empty.

According to a witness, “it seemed that the flames were extinguished and the emergency services said that the fire was controlled, but then it revived and the building collapsed”. Some firefighters were in the building at the time of the collapse.

The Plasco shopping center collapsed three and a half hours later than the start of the fire, which spread throughout the plants. The causes of the fire, which began on the ninth floor and caused the collapse of the northern wall of the building first,remain unknown.

Steel structures are used for building purposes worldwid mercor tecresa® has conducted numerous tests with Tecbor® according to UNE EN 13381-4 standard, in which is determined the contribution of fire protection of the board when we protect steel structural elements, either on beams, columns or bearing elements. More info about metal structure fire protection.