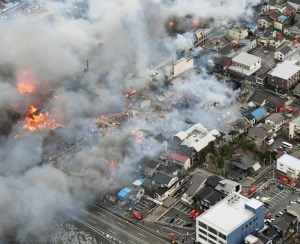 A massive fire engulfed some 150 wooden buildings in Japan

Firefighters in Japan controled last week a massive fire that engulfed some 150 buildings and injured eight people in Itoigawa in northwestern Japan. The fire broke out on Thursday around 10.30am at a restaurant in the heart of the city and quickly resulted in a huge column of smoke around 300 meters high. It led to the evacuation of hundreds and charred around 40,000 sqm of this city in the Niigata prefecture, spreading fast between the buildings, helped by strong winds in this coastal city over the last two days.

The large number of traditional wooden buildings in the city has contributed to the rapid spread of the fire, even as the narrow streets complicated the work of the firefighters.

How to protect wood houses against fire?

As you can read in Fire Protection on Timber Structures, wood structures are seen by many as creating an environment less safe than structures built of non combustible materials such as steel and masonry. However, experience has shown that some wooden structures have a fire resistance comparable, or greater than that of many noncombustible alternatives. Some statistical figures are given comparing wood with other materials.

Mercor Tecresa has two different solutions used commonly for timber structures. On one hand we have the Tecwool F Mortar Protection, it adapts to a wide variety of supports, even when exposed to settlement vibrations or movements. It has a perfect adherence and flexibility. It also has exceptional characteristics regarding sound and acoustic absorption in reverberation room. Moreover, the mortar acts as an excellent thermal insulator thanks to its thermal conductivity value. On the other hand we have the independant false ceiling EI-120 with a Tecbor Panel which is the most competitive and the lightest solution of the market.