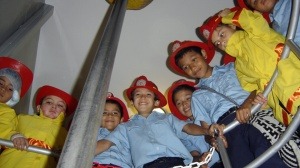 Fire prevention education can take the form of videos, pamphlets, and banners. Often, the messages and lessons are simple tips. Effective and important lessons and messages include:

If one’s clothing catches on fire, the most effective method of extinguishing the fire is to stop, drop to the ground, and roll back and forth to smother the flame. Running around will simply fan the flames.

Working smoke detectors reduce the chances of death in a fire by half.

Nearly 900 lives could be saved annually if every home had working smoke detectors.

Even just one smoke detector reduces the chances of death by almost half.

Nearly half of all fire survivors remember hearing their smoke alarm.

Deaths due to fire have decreased by half since the invention of the smoke detector.

Most deaths due to fire occur at night when people are sleeping.

The most common cause of smoke detector failure is missing or disconnected batteries.

Nuisance alarms are the most common reason for deliberately disconnecting batteries.

Smoke detectors should be installed on every level of your home.

Change your batteries twice a year.

Disconnecting your batteries, for any reason, is dangerous and illegal.

Don’t just leave to do something else

One of the most common reasons for fires is how people often leave stoves, ovens, toasters, clothing irons, barbecues, and candles unattended.

Firefighters are your friends

One of the most critical jobs of a firefighter is search and rescue. For young children, it is important that firefighters are seen as people they can follow and trust. A firefighter in bunker gear breathing with an air tank can be scary. One way a child can get used to or trust a firefighter is seeing a firefighter dress up step by step seeing that it is a person inside. Furthermore, being able to walk up and touch the firefighter can reassure the child that he or she is a real person. (This has already been implemented by many fire departments across the US during Fire Prevention Week.)

Playing with fire causes many unnecessary emergencies, it hurts and kills many people.

False alarms waste valuable manpower and resources, which may be needed desperately at a real emergency. Also, any time firefighters ride trucks, they are at risk. Eighteen percent of firefighter deaths occur while responding to calls.