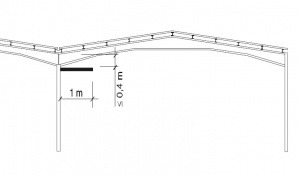 After the fire in London in an industrial unit in the district of Tottenham, we want to tell you about the most effective passive protection solution to prevent the spread of fire in industries. The adjacent units sharing structure to the unit where the fire has started, is usually also affected. This brought the necessity of doing something in order to prevent it from happening.

The most delicate point in this issue is the wall that divides the two units or “partition wall” and within this element, the most exposed part to the flames is usually the covering connecting this two units. In order to prevent the fire to spread, the  2.004 ”Fire Safety in Industrial Establishments Code” (RDSCIEI in spanish) in the point 5.4 makes obligatory to place a strip equal to 1 m. and at least with the half fire resistance of the partition wall at a maximum distance of 0.4 m from the bottom of the deck. Thus, the flames going up to the wall will find a tough obstacle of a minimum of one hour resistance to fire. At the same time, a test protocol was also established to test these stripes in order to unify judgements with the manufacturers who test this kind of systems.

This standard, document or protocol establishes that these strips can be installed with an open edge (with its supporting structure exposed to heat), but since it is impossible to do a test of such characteristics in an oven, the same with a closed  edge will be done by an inert and resistant fire element. This circumstance makes that the tested results are not always the same as the real one and the supporting structure endurance is less than the indicated in the test results.

The non obligatory installation of this kind of stripes in Industrial Units with a Business License previous to 2004 is, in my opinion, another aspect to improve on this issue. When a new tenant starts an activity in an existing unit, you must perform the firewall so in case of fire in it, the flames will not spread to the adjoining strips. If the fire occurs in adjacent units with no firewall strips, our band is not going to protect properly, because the flames will find the supporting structure of our stripe, causing a worst fire resistance.