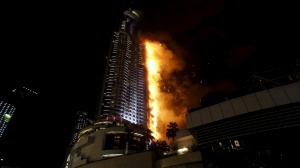 Fire protection in skyscrapers and towers

The 12th of February of 2005, the Windsor Tower in Madrid burned leaving a cloud of smoke that could be seen many kilometers around. The Windsor Tower lacked a sprinkler system because in 1974, when it was built, it was not mandatory. Fortunately, at present, the law provides that there have to be a fire protection system in every skyscraper.

What is the current trend in fire protection in skyscrapers?

In New York, after the 11-S, regulations regarding to fire protection skyscrapers have changed. Previously they depended mainly on steel. Now, it points to the concrete as a fire resistance material. (See fire protection in steel structures)

In Spain, the CTE stands safer structures and increase fire safety for them. For example, it establish many measures for preventing the spread of both inside and outside the building and the structure fire resistance.

A good fire prevention system does not work if once installed there are not a regular maintenance, which is what ensures the effectiveness of the system. The maintenance phase is the proof that the system is working equal as the day it was installed.

What does Mercortecresa about it?

Following this new regulation and trend, in orther to give more importance to the fire protection of structures, Mercortecresa has participated in the construction of several of the most important skyscrapers and towers in Spain providing solutions for passive fire protection as Tecbor panels, Tecsel sealing systems and other elements such assmoke evacuation systems. You can see our skyscrapers projects in which we have worked on the following link: