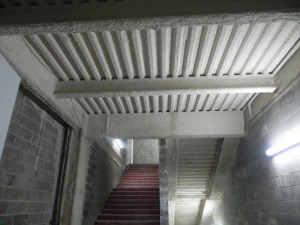 This type of mixed concrete forged with profiled steel sheet began to be used in the United States in the mid-twentieth century and it is very common in both rehabilitation and new construction due to the simplicity of the assembly, since the sheet acts as the base of the formwork allowing a great speed in its execution and a greater lightness in the own weight of the same one compared with a concrete slab or a beam forged and a traditional vault. They are called collaborator because this sheet acts like an iron helping to withstand the positive traction efforts on the same one.

They have three major disadvantages:

– It is a relatively more expensive solution.

– Bad behavior to the fire (you have to protect it)

Today we want to talk about how to solve the last problem, since there is a specific test standard for this type of slabs, the UNE ENV 13381-5 “Tests to determine the contribution to the fire resistance of the structural elements. Part 5: Protection applied to concrete elements/profiled steel sheet”. From our technical department we have successfully tested under this standard our Tecwool F mortar with different thicknesses depending on the depth of the concrete and the Resistance to fire. Thanks to this product, while protecting the fire, we also improve the thermo-acoustic conditions and protect the sheet from corrosion.

From our professional experience, we have noticed that there are manufacturers and installers who try to justify incorrectly the fire resistance of this type of slabs by  Protection of Concrete Elements tests, that is to say the UNE ENV 13381-3. The tests for this type of flooring are different from those of concrete elements since, among other variables, thermocouples must be placed in the plate and ensure that the temperature does not reach 350 ºC which is its critical temperature. This variable is not measured in a test of concrete, since the importance of the temperature of the armature more exposed to the fire that is inside the concrete is given importance.

It is also true that there are manufacturers of profiled steel sheet that have performed fire resistance tests of this type of floor slabs. They get that placing an additional lower reinforcement they achieve certain resistance to fire. Then, the profiled sheet only acts as a lost formwork losing the properties of Collaborator. In this particular case, the flooring must already be treated as a concrete slab and verify that both the distance of the face exposed to the reinforcement and the minimum edge comply with what is established in the DB-SI in its Annex C.