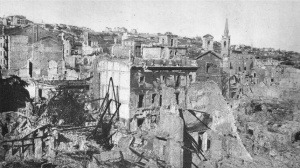 On February 15, 1941, a big fire burned part of the city of Santander that would change it forever. A fire, struck by an intense south wind, devoured the center of the city, leaving about 10,000 homeless people and 120,000 square meters of ruins and rubble, where up to that time was joined by 90 percent of commercial activity.

In the post-war period following a recent Civil War, the inhabitants of Santander received solidarity, not only from the emergency forces of their city and many others who came to help them, but also from different entities and a multitude of individuals. Donations of clothing, food and money came from all parts of an impoverished Spain. And also from abroad.

Seventy-five years later, the city commemorates this event with the aim of paying homage to the victims and the people and institutions that helped them. As well as to recover for the future the living memory of the Fire. Commemorating fires that have caused so much damage in the city can help preventing possible future fires.