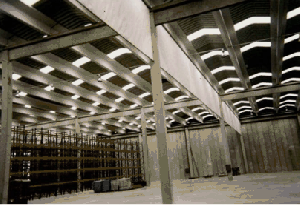 According to their functionality they are divided into two groups:

1- Fixed or mobile smoke curtains to sectorize or conduct fumes towards the Smoke Evacuation System (normally smoke ventilators). The only difference between them is that the mobile one have the ability to roll up in a drawer when there is no fire. Due to its low weight, weights are placed in the lower part but they fall in the case of the movable ones or they are maintained by gravity in the fixed ones. Its height depends on the calculations made according to the standard UNE 23.585. Usually 1000 ° C for one hour “DH60” and 600 ° C for two hours “D-120”, according to 13.501-1 and complying with the specifications set by UNE EN 12.101-1 “Systems for the control of smoke and heat. Part 1: Specifications for Smoke Control Barriers “.

2- Mobile barriers with the function of realizing a sectorization to the mobile fire in case of fire. This type of elements is made and look similar than the previous ones but they have some peculiarities. On the one hand, they totally close the gap to sectorize and on the other hand it is necessary the use of specific lateral guides that guarantee that the fabric does not leave the guide due to the pressure of the fire and to maintain the tightness. Usually these tests guarantee the integrity of the same and the crossing of smoke and flames. But to guarantee the Thermal insulation that is produced by the thermal radiation “W”, if there is fire risk on the other side, it is necessary to combine the barriers with Automatic Fire Sprinklers on both sides to be able to lower the temperature.

The sectorization and smoke conduction barriers are mandatory according to regulations in industrial buildings of more than 2,000 m2 or if one of its dimensions exceeds 60 linear meters. This is done because it is shown that when the smoke in case of fire ascends and runs along the deck above those dimensions it gets to cool enough to go down again hindering the escape routes or preventing the display of the fire focus.

In public buildings with atriums, they also have the functionality of conduction the smoke to the smoke ventilators, preventing the smoke from obstructing the escape routes. In this type of buildings, we usually place mobile barriers to roll them when there is not a fire. For example, in a hotel with atrium, they are installed in the lateral corridors giving access to the rooms and to that atrium where the smoke ventilators are placed.