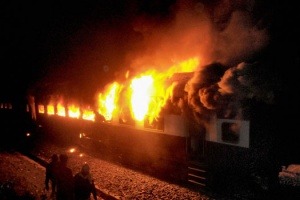 Worst historic train fires during the XX and XXI century

Unfortunately, since the train exist as a method of transportation, there have been many accidents including fires killing a lot of people. These are the worst trail fires during the XX and XXI century.

1996 – Channel Tunnel fire between France and England on November 18

2013 – Lac-Mégantic rail disaster kills 47 when an unattended 74-car freight train carrying crude oil rolled downhill and derailed. More than 30 buildings in the town’s centre, roughly half of the downtown area, were destroyed.