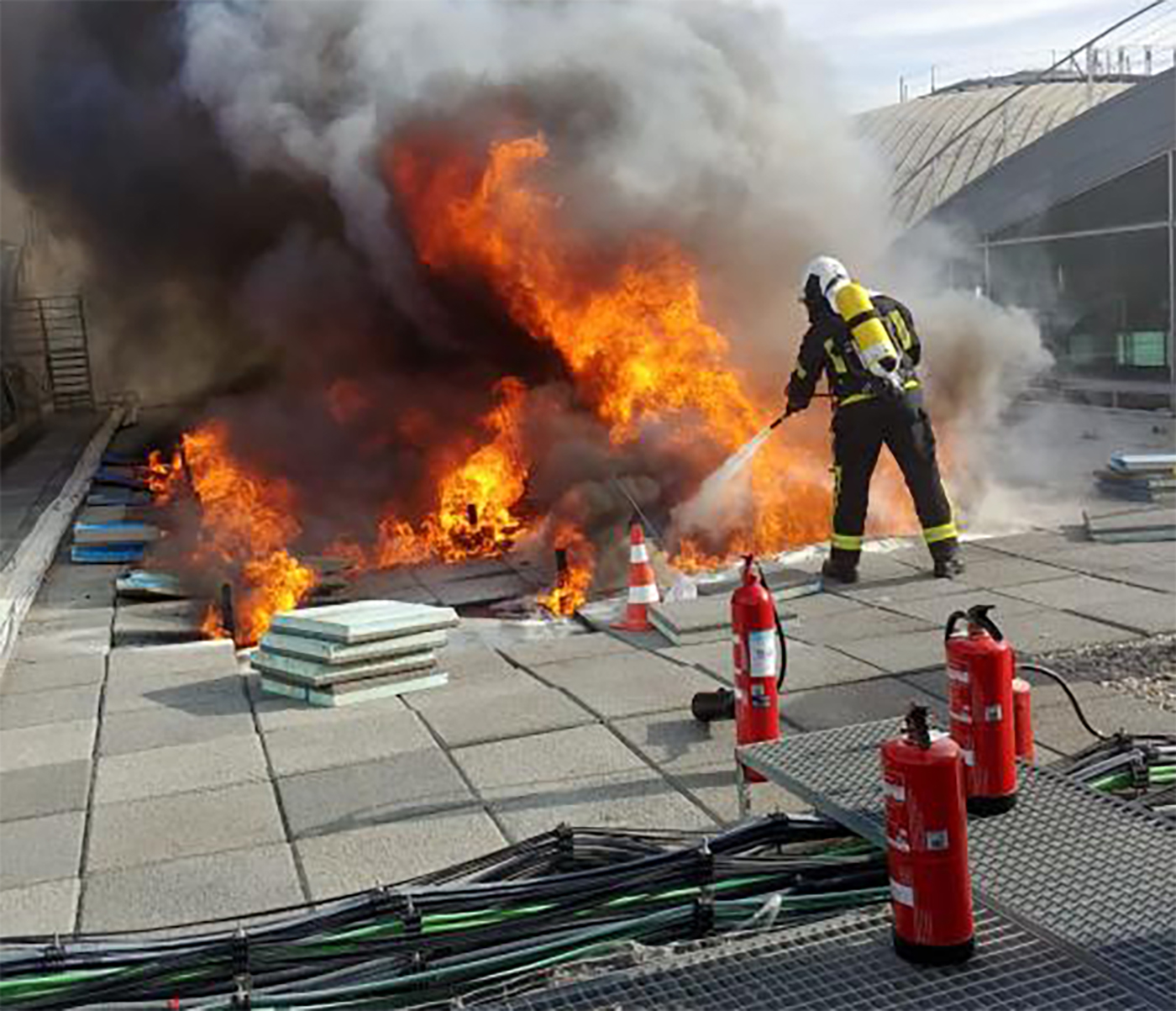 Fireproof materials in case of fire:

On January 15th, a fire broke out on the roof of the airport in Elche – Alicante and the building was evacuated. There were no serious injuries, but there was abundant material damage in addition to 169 flights and more than 30,000 passengers affected. Some 1,200 m2 of roofing containing material that could have contributed to the spread of the fire that occurred inside the building burned down.

The curious thing is that the new terminal was completed in 2011 and with the current fire regulations DB-Si in force, which regulates the reaction to fire of the materials used in the construction of roofs and facades. In the section on Exterior Propagation, it is required that the roofs have a BROOF fire reaction classification (t1), according to Royal Decree 312 of 2005 this classification implies:

It has been published that the roof was composed of several layers:

This type of tile with insulation on the underside of the roof is very likely to meet the BROOF specification (t1). So, in this case, it is likely that the Technical Building Code would be complied with in the section on External Propagation.

From what has been published in the press, it can be thought that the fire most probably originated in the passage of various installations through the roof or in installations that were hidden between those layers that we have mentioned. As a consequence, the intermediate layers of the roof burned with a slow combustion, making the work of the firemen much more complicated, since they had to remove layers of the roof so that the foam could penetrate it and suffocate the fire.

In the DB-SI in the section on Interior Propagation, the Reaction to Fire of the Materials contained in: “Hidden non-sealed spaces, such as skates, false ceilings and raised floors (except those existing inside the houses) etc. or which, being watertight, contain installations susceptible to start or spread a fire.   Must be:  B-s3, d0

Here it´s possible that the choice of fireproof materials in case of fire was flawed, because if a material with reaction to fire EUROCLASS B had been chosen, it would not be susceptible to contribute to a fire as occurred on the roof.

If in these spaces there are materials with a worse reaction to fire than specified, as has been the case, and they cannot be replaced by others, this layer must be isolated from the possible origin of a fire with a sheet of at least 30 minutes of Fire Resistance (EI-30), as also mentioned in the DB-SI.

In conclusion, it´s true that more and more building fireproof materials in the event of a fire are being used than before and are selected with ecological and sustainable criteria, but this cannot be the only point of reference, we must always think about a possible fire before it occurs. We can always try to choose ecological and sustainable materials, but which don´t contribute to the development of a fire, and if there is no alternative to using combustible materials, Passive Fire Protection should be used, isolating them from the possible source of the fire by means of fireproof materials.