mercor tecresa® » News about fires » Consequences of fires on health 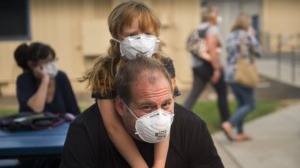 Consequences of fires on health

A constant exposure to the toxic effects ofthe smoke caused by a fire can cause health problems and in the worst cases, the death. We remind you that smoke asphyxia is one of the main causes of deaths in fires.

The smoke particles generate substances and acids that are very dangerous and corrosive to health. Compounds derived from combustion are incorporated into our body by different routes: cutaneous, conjunctival, respiratory or digestive. They pass freely through the membranes of adipose tissue cells, where they are stored and where they can remain for a long time and be released gradually in the whole body.

Larger diameter particles suspended in the atmosphere are trapped in the mucous material of the respiratory system, or they induce the cough reflex and are eliminated with some ease. On the other hand, small particles are able to reach deeper parts of the respiratory system and there they produce alterations of greater consideration, and even induce asthmatic processes or aggravate pre-existing bronchial asthma in some people” according to Feria, a postdoctoral Experimental Toxicological Neuropathology by the School of Medicine, Harvard University, Boston.

Effects of fires in health

A fire affects mainly two systems in our body: “One of them is the respiratory system, which is very damaged by the high levels of pollution that occur in the most populated cities of the world, for example, and secondly to the superficial parts of the body, mainly in the eyes. “

Smoke produce irritation and inflation of the conjunctiva, that is what we commonly know as toxic conjunctivitis. “For those who have dry eye problems, it can cause them even corneal ulcers and after their exposure to smoke they can have their vision reduced severely,” according Ascencio in an interview with CNNMéxico. In case of losing part of the vision, you have to go to the doctor.

Advices to avoid serious consequences of fires in health

After a fire, if there has been contact with the smoke, people may experience dryness of the throat, cough and irritation of the eyes. When you feel dry in the throat you should drink water, take vitamins and juice, says the expert. Irritation in the eyes is controlled by keeping them well hydrated with drops that resemble tears or with a solution containing chamomile.

If there is a fire at home, you have to move as close as possible to the ground, usually crawling, as the smoke tends to go down. Before opening a door or window you should touch them and if they are hot, do not open it. In case you have fire in your clothes, you should throw yourself to the ground and roll over yourself to turn it off.