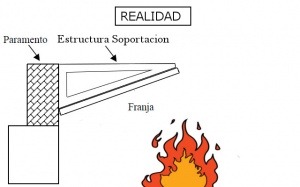 In this post we make a reflection on how to carry out a correct support of the different “Fire belt barrier systems bands” according to the Regulation of Fire Safety in Industrial Establishments (RSCIEI).

The first consideration we make is about the distance from the Strip to the deck. The RSCIEI marks that it shouldn’t be more than 0.4 m from the lower part of the deck when the strip is horizontal, but which reference we take when the strip is leaning, the beginning or the end? Let’s see the following graphic for example:

The regulation does not say anything about it but we have seen on several occasions that it has taken as reference for this measure the end point of the fringe. In our opinion, for a constructive element, it seems more logical to take as a reference the midpoint of the strip as it appears in the graph. We must also remember that the marked meter is in horizontal projection, so if we install it in a leaning position, we will always have to calculate what length of strip we must place, since it will always be greater than that meter marked horizontally.

The next point to take into account is how to install the different systems. The RDSCIEI tells us:

A) Integrated in the cover itself, provided that the permanence of the strip is justified after the collapse of the parts of the non-resistant cover.

(B) Fixed in the structure of the deck, when it has at least the same fire resistance as the required strength of the strip.

C) Formed by a barrier of one meter of width that justifies the required fire resistance and placed below the cover fixed to the Fire belt barrier.

Regarding the option a), it says that: “The application of projected systems, paintings or other direct does not guarantee the permanence of the strip and should be avoided.”

Option b): anchorage to the belts, it should only be used when we have belts that comply with the same load bearing capacity as the Strip. Here is where we have seen the main faults of strips installation: anchored to unprotected metal belts. We have even seen anchors to a roof type alumisol. Sometimes, when the distance between straps is greater than a meter, it is places the corresponding plate meter and leave part of the omegas of support visibly. This is done by ignorance or in order to save money, but they are totally unacceptable practices.

Regarding the option c), it is the safest since the system is similar to how it has been tested according to the Protocol of Test of Fire belt barrier systems.

We would like to make the following reflection here: let’s see in the diagram how a test is performed and how it is actually installed: 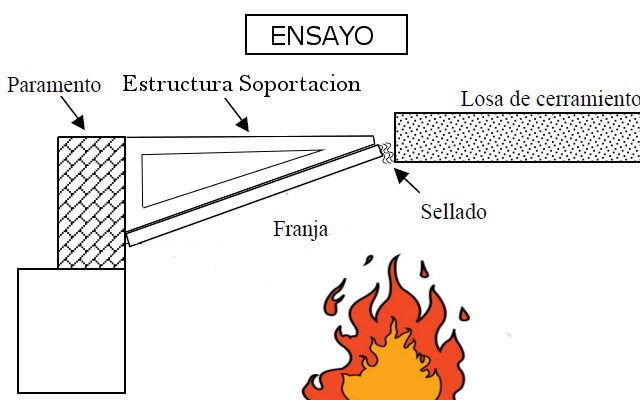 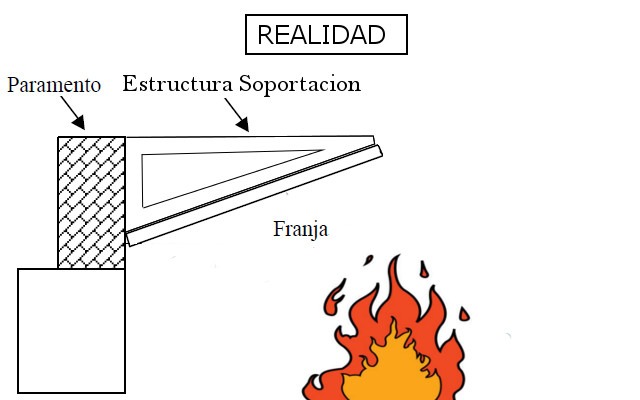 The Protocol of Test Strips says that they should be tested in closed, as can be seen in the figure and can be installed in open. It is clear that the support structure is going to undergo a greater temperature increase than in the test and usually it is a support profile composed of very slender profiles. Certifying that a Firewall Strip is going to last 60, 90 or 120 minutes as justified by the test, in my opinion, it is too much. But as it is said in the RDSCIEI: “It is not necessary to vertically close the space between the free end of the strip and the enclosure, although in some cases it may be convenient, depending on the discretion of the person responsible for work.”

Finally, regarding the usual doubt of the possibility that the strip can be made by one side of the fire belt barrier making 1 meter, the Royal Decree says:

“The width of 1m that is set for the strip is the one you should have in total. This length can, and should be spread out on both sides of the fire belt barrier equally, whenever possible. When there are limitations in this regard, specially in the case of acting on a single vessel (by change of use, owner, etc) without possibility of acting on the contiguous (for belonging to another owner, for example, that is not required) a complete meter may be installed only on one side, taking into account, however, that if these limitations disappear (an action required of the other ship some time afterwards, for example) a complete meter of strip must also be installed from that side . “