How to put out a gasoline fire

Although the explosion of a vehicle or throwing a cigarette on gasoline are scenes with large Hollywood doses, it is better not play with fire when it concerns gasoline because sometimes it can be more dangerous than dynamite. The main problem resides in its vapours, which are invisible, explosive and flammable.

This petroleum derivative is a flammable liquid that burns and continues to burn very easily. Even at temperatures as low as -40 ° C, gasoline can release enough vapours forming a mixture that burns in the air.

Its Lower Flammability Limit (LFL) is 1.4% and its Upper Flammability Limit (UFL) is 7.6%. This means that gasoline burns when it is in the air at levels between 1.4 and 7.6%. That is, the presence of gasoline vapors in the air below 1.4% means a mixture “too poor” to burn. On the other hand, if the air has a percentage higher than 7.6% of gasoline vapors, it will be a concentration “too rich” to burn.

When gasoline burns, it generates a black smoke in the air, characteristic of fires with high thermal loads and low oxygen. Smoke from a gasoline fire has toxic components, including benzene, xylene, heptane, toluene and hexane. It is aromatic and aliphatic hydrocarbons with harmful effects on health.

Gasoline is also an organic compound that contains carbon. In case of incomplete combustion (i.e. a combustion with little oxygen), it produces carbon monoxide. Recall that this chemical, CO, is a colourless, odourless and tasteless gas that is not detected through the senses and can cause death.

Acting correctly in case of fire is essential. Let’s see below how to react if we find a fire caused by gasoline: 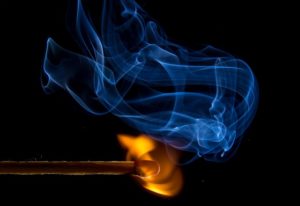 How to extinguish a gasoline fire?

Likewise, foam is effective in these cases because it suppresses harmful vapours, while preventing vapours from finding a source of ignition. A layer of foam on a fuel spill can also prevent a possible fire.

What not to do if it burns gasoline?

Even if panic strikes, we will avoid using the mobile phone and electrical devices (including light). Remember that it is forbidden to use the mobile phone during refuelling at gas stations. The main reason lies in the emission of gases, which are flammable and toxic. The mobile can generate sparks (by its battery and electromagnetic waves) which can cause an explosion when contacting the gases of the service station.

Nor will we light matches, lighters or cigarettes if we find a gasoline fire. Water is also an enemy when it comes to a fire whose fuel is liquid since it can aggravate the situation for example by an explosion.

Flame protection is essential in spaces such as refineries given the high risk of fire and explosion. Let us recall some solutions in passive fire protection especially indicated for this type of installation:

-Tecwool® 825 Mortar from mercor tecresa®: specially designed for fire protection in industries and tunnels, it is a mortar made with rock wool, cement and refractory material in small proportions.

-Tecbor® Joint Paste Ready to Use and intumescent pillows: solutions for a perfect sectorization and fire protection of cable trays.