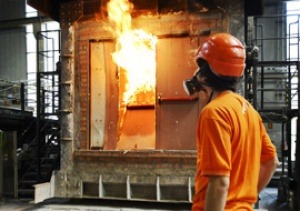 The DB-SI defines Fire Resistance as: “The ability of a building element to maintain for a period of time the bearing function (R) that is required, as well as the integrity (E) and / or thermal insulation (I) in the terms specified in the corresponding Standard Test “

Regarding the Test Standards, they are also included in Annex G of the DB-SI which specifies how tests should be performed according to the corresponding constructive element. For example, it would not be correct to justify the Carrying Capacity (R) of a steel pillar, with a non-load bearing, as in the first case its bearing capacity (R) should be tested with a load determined by the standard and in the second case only the Isolation and Integrity (EI) criteria are tested, evidently without any type of load.

Another important aspect in a Fire Resistance Test or a Classification Report (which is a summary of the test with the description of the sample tested, test standard and the result) is its Direct Application. Here, we describe in which cases we can or can not use the test for the correct certification of the constructive system. For example, the allowed variation of dimensions of the sample tested with respect to the one that we are going to install.

For a correct certification of a fire resistant construction system, the manufacturer must provide the Classification Report, mentioned above, providing that the sample tested and the result is clearly described, otherwise the complete test must be provided. The installer also has the responsibility of assembling the system as the manufacturer prescribes it according to the corresponding test and the installer must provide a document called “Installation Certificate” which is responsible for it.

On the other hand, it is impossible to test absolutely all the construction systems as they are to be assembled on site and sometimes leave the field of direct application of the test, then changes are made with respect to the test sample and consensus of the Facultative Direction of the work, who is going to give validity to the modification.