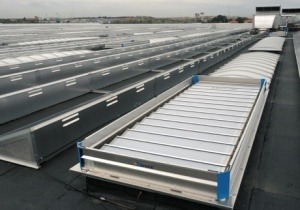 Shopping centers are buildings with certain peculiarities that also make them special at the level of fire protection.

First, let’s talk about sectorization, according to the DB-SI these centers should be sectorized every 2,500 m2, except that they have an automatic sprinkler system, which can do every 10,000 m2, as long as the evacuation height does not exceed 10 m.

Fire Resistance of partitions and ceilings in Shopping Centers

Regarding the fire resistance of partitions and ceilings, as well as of the Electrical Installation through our Tecsel® Systems, it should be:

Usually, shopping centers in Spain are a copy of the great American Malls, with large open spaces, with an atrium that communicates the central zone and two or three floors with a height above slope less than or equal to 15 m. with which will usually have a requirement for the sectorisation elements of an Insulation and Integrity of 90 minutes on flush and 120 under flush.

Fire resistance of the structure in Shopping Centers

Regarding the fire resistance of the structure, the DB-SI establishes for this type of establishments the following:

The main structure of these buildings is usually concrete or metallic one, in the latst casemortars such as Tecwool ® or Tecplaster ® Mortar are often used to achieve this resistance to fire.

It is established that: “The main structure of light covers not intended to be used for the evacuation of occupants and whose height in relation to the exterior grade does not exceed 28 m, as well as the elements supporting only those covers, may be R 30 when its failure can not cause serious damage to nearby buildings or establishments, nor compromise the stability of other lower floors or compartmentalisation of fire sectors. For such purposes, a roof whose permanent load due to its enclosure alone does not exceed 1 kN / m² may be understood as light. “In this type of building, because of its unique characteristics, the roof frames are usually metallic and because of the lightness of their cover, they fall under this section and the requirement is usually R-30. For this fire resistance, Intumescent Paint is usually used such as our Teclack® Paint. The DB-SI excludes belts from the requirement of fire resistance, provided that it is a secondary structural element and its deformation does not collapse parts of the deck falling on escape routes. If we already have straps with certain entity (type IPE or similar) and widely spaced apart, one should also consider part of the main structure and ignite them.

Regarding escape routes, usually, apart from the entrances and exits of the building, because there are not enough, there are specially protected routes through air overpressure systems that prevent smoke from entering them. This overpressure must be made by ducts that are Fire Resistant as developed by Mercor Tecresa with Tecbor® Panel of 30 mm.