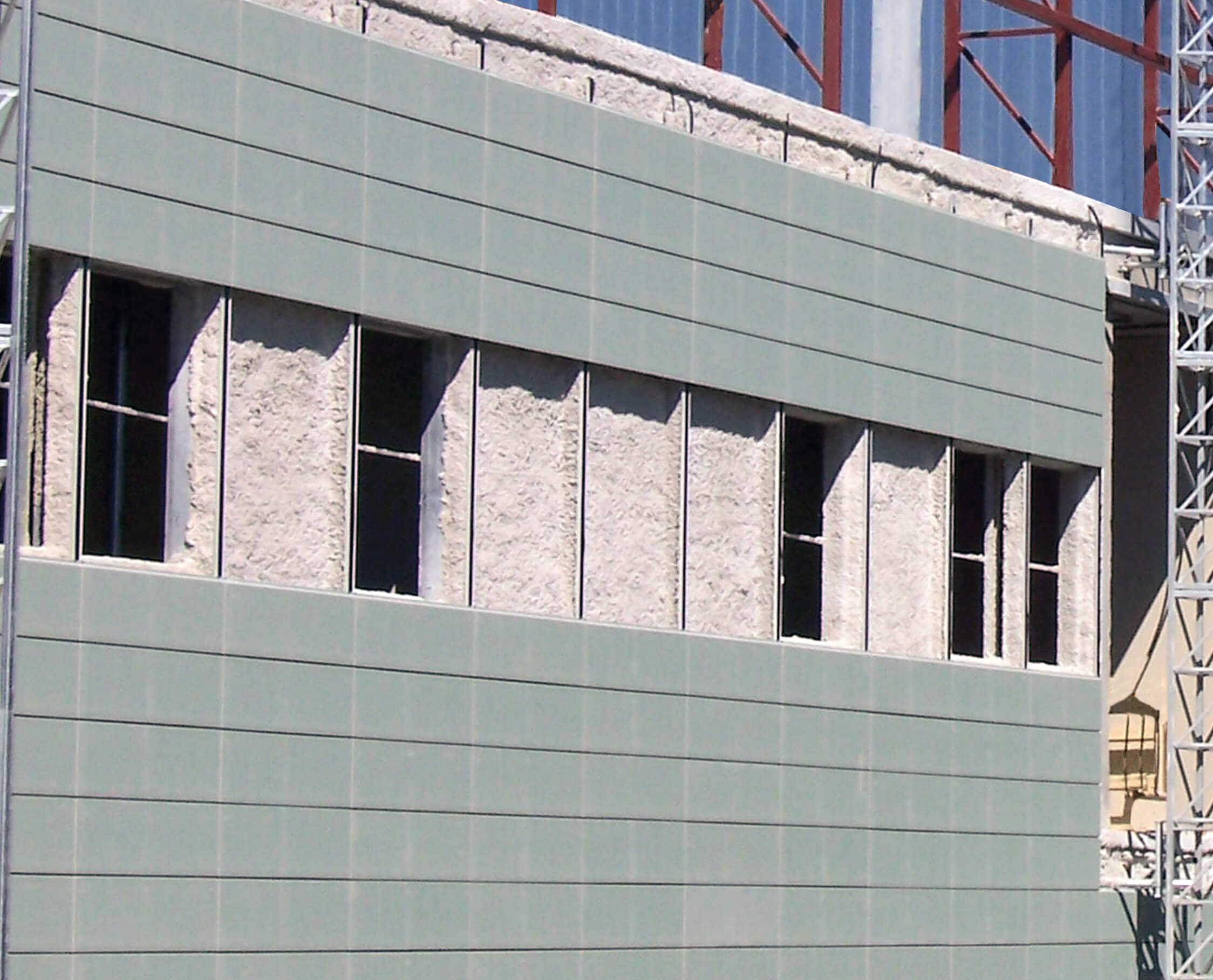 Ventilated façades is a construction system composed of an inner layer, an insulation layer, an air chamber and an external watertight layer. This type of façade offers an excellent thermal efficiency and is increasingly used in both new buildings and in the façade renovation of old buildings.

There are generally two types of requirements regarding the fire propagation through façades; The first one is the Fire Resistance requirement. This type of ventilated façades normally fulfills the DB-SI-2: Outdoor Propagation requirements without any problem, since the inner layer is usually made of brick or block that already fulfills EI-60.

The problem that affects this type of façade in its behaviour in the event of a fire, as in all the external enclosures, is that special care must be taken with the fire resistance of the elements that compose it. We must prevent a possible fire in a house from being spread vertically through the façade to the rest of the building, as we have tragically witnessed in the Grenfell Tower in London with 71 deaths.  The CTE specifies:

“The Fire Reaction class of materials that occupy more than 10% of the surface of the external finish of the façades or the internal surfaces of the ventilated chambers that such façades may have, must be B-s3, d2 up to a height of at least 3.5 m, in those façades whose lower start is accessible to the public from the outside grade or from a ceiling, and in the entire height of the façade when it exceeds 18 m, regardless of where its start is located.”

In other words, in the case of buildings with less than 6 storeys, it is only necessary to control what Reaction to Fire the elements of the façade have in the first 3.5 m if the public has access to them. From there, if the fire comes out through a window on the second floor and enters the façade, it may burn and spread the fire without any difficulty. From our point of view, this is something that should be carefully studied.

For buildings with more than 6 storeys and more than 18 m in height, it is already specified that the materials must comply with this requirement B-S3,d2 (Fuel but with a very limited contribution of fire). But in the commented edition of the CTE of June 2017 it specifies for the interruption to the fire in Ventilated Façades:

“As an alternative to the requirement of a reaction to fire class B-s3,d2 for existing materials in ventilated chambers of facades of more than 18 m in height, a class C-s3, d2 may be admitted, from the 3.5 m established from the starting point, for them if the provisions of article SI 1-3.2 are complied with (three storeys and a maximum of 10 m of vertical development of the chamber) and what is indicated in a commentary to the same, that is to say, if the barriers that interrupt this vertical development are E30. For these purposes it is underlined that this interruption only needs to be effective in a fire situation, and therefore nothing prevents the barriers from being intumescent, in such a way that in a normal situation they allow the chamber to be kept ventilated”.

This comment has led to the request of this type of Intumescent Barriers every 10 m, even independently of the Reaction to Fire of the elements that compose the Ventilated Façade. This is the case of the Biscayan Administration.

Both the E-30 fixed barriers, which do not have any sense in the ventilated façade as they would interrupt the desired ventilation, and the E-30 Intumescent Barriers, do not have the easiest certification. These intumescent materials are tested fixed to the joints of Fire-Resistant supports and, commonly, the slab may already have that fire resistance or even higher. Neither does this occur on the external layer of the ventilated façade, nor on the metal supports that anchor the external cladding to the internal wall. In the case of a fire in a room, the external cladding would collapse after a short time and the intumescent material or even the fixed barrier would have no sense; the fire would continue its vertical expansion through the façade without any problem as shown in the following picture: 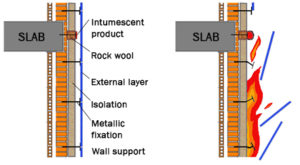 The only possible solution to prevent the flames from being spread through the façade is that the façade materials possess a Reaction to Fire that prevents the spread of the fire. This type of barriers will not work properly no matter they have been tested in sealing joints between two fire-resistant materials.