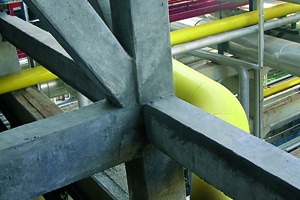 The Tecwool 825 Mortar a high density mortar, is designed to withstand high demands on its behavior against fire scenarios that may occur in the hydrocarbon industry. Its formulation must meet three main requirements in comparison to conventional fire protection mortars:

1- It must withstand a very rapid increase of temperature as it usually happens in fires in this kind of industries. As you can be seen in the following graph, the ISO red curve is used to test typical fires in homes, public and commercial centers, industry in general, etc. The blue curve is the one applied in Europe and the green one the one used in the United States. The European Hydrocarbons curve reaches 1000 before the first 10 minutes of the test while the ISO curve reaches that temperature over 90 minutes of the fire. 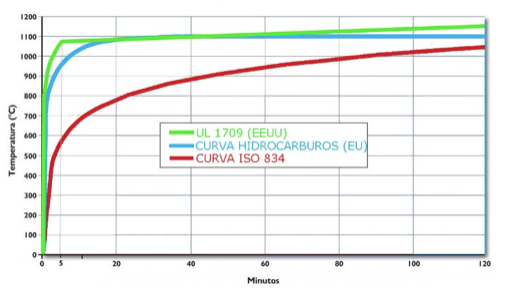 2- It must also withstand the mechanical stresses of a deflagration. The product must be strong enough to withstand the explosions so common in fires in this type of industry and at the same time it has to have a certain elasticity to absorb the typical dilations in metal structures.

3- Finally, this kind of facility tends to have most of the structures exposed to the weather and in most cases very close to the sea, whereby the product must withstand both adverse weather actions and aggressive substances in marine environments.

To this end, the R & D & I department has developed a product called Tecwool 825 mortar that perfectly complies with the three conditions mentioned above. Its main mission is protecting metal structures from special fires and that is why specific tests have been carried out.

The finish of the product can be of two types:

a- Unfinished, as it remains once projected. 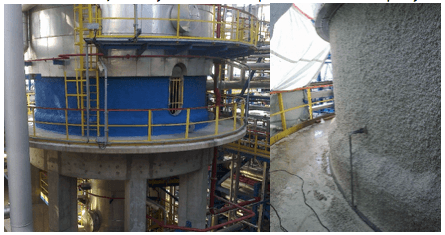 b- Formwork and finishing with a similar ending to reinforced concrete: 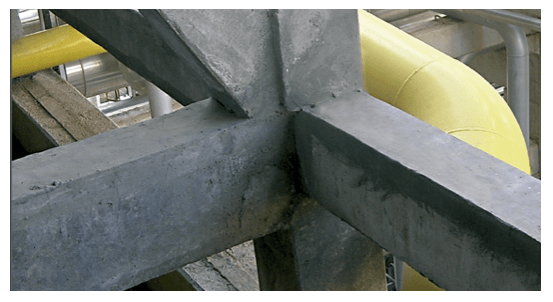 In both cases, the product requires the installation of an internal metallic mesh separated from the structure to be protected by support bolts.